The Doom Patrol first appeared in My Greatest Adventure #80, written by Arnold Drake and Bob Haney and illustrated by Bruno Premiani. The story introduces us to the Chief, Niles Caulder, as he gathers up a group of outcasts: Cliff Steele, a race car driver who got into a horrendous crash and whose brain was transplanted into a robot body; Larry Trainer, a test pilot who encountered something strange in the upper atmosphere that made him radioactive and lets him unleash the negative spirit for sixty seconds (if any longer, he dies); and Rita Farr, an actress who was exposed to a strange gas that caused her to grow to a giant size. Their “freak names” (which they hated) were Robotman, Negative Man, and Elasti-Girl. And their arch-enemy, whom they encounter in the same issue, is General Immortus. Más en io9. 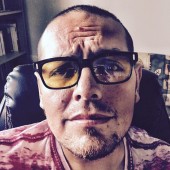